So this month, Gary’s Welding Inc. turns 29! Yep…almost the big 30. To celebrate, we would like to reminisce about just a few of the early memories we have of our first days in business.

Gary and Laurie and their little family moved to Gillette in the summer of 1984, when Gary got a job working at a welding shop in Gillette. At that time, Gillette was much smaller, but was going through a boom and had a lot of work that was not available in some of the neighboring states. 5 years later, Gary and Laurie started Gary’s Welding in August of 1989. It didn’t become an “Inc.” until a few years later.

Gary’s first truck was a copper-colored welding truck that could be heard from blocks away. He had bought it used from a friend’s father who also was a welder and that truck served him well for many years. He later sold it…but the copper truck still has a special place in our hearts.

Every business person needs a phone, right? The first portable radio phones (bag phones) were the precursor to cell phones – remember those?? Gary had one in his copper truck and it was hooked up to the truck horn so he could hear it if it rang when he was in the field. It was quite an effective attention-getter. We also had an authentic rotary dial phone for quite awhile in the home office. Those were the good ol’ days – when you had no idea who was calling you before you picked up the phone. 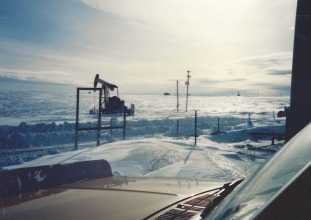 A lot of our early jobs included going out on midnight calls to put on a well head or make a cut off. Or to do repairs on oil rigs or pumping units. It was both exciting and exhausting.

We also did many plant shutdowns – usually out of town – for the spring/fall shutdown seasons. Those make for really long hours in some tight spaces. Ever been inside of a boiler? 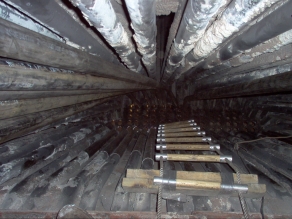 This picture to the right is of the inside of a boiler – looking down onto the mud drum after some tubes were removed. We were getting ready to install new tubes.

Those are just a few of the many memories we have of starting and getting a business off the ground. Thanks for taking the time to stroll with us down memory lane.

And, we would be completely remiss if we didn’t take an opportunity to address our customers, past and present here: to each and every one of you, we are deeply grateful for your business and trust through the years. We look forward to serving you in the days and years to come.