Every welder gets their start somewhere.

Whether they grew up working in their Dad’s shop as a young boy or girl, or whether they learned the skill sometime later in life, they had to start somewhere.

I remember distinctly being a young’un of about 6 or 7, standing in the welding shop my Dad worked in at the time. The smells, the sights, the sounds of the welding and grinding and hammering – it was loud and echo-y and a far cry from my cozy home. But it was exciting, too. In a shop setting like this, one could create nearly anything that came to mind!

Even now, when I smell the distinct smell of a welding shop, it’s a bit comforting. Don’t get me wrong…I don’t care for the smoke at all. But I did come to really like the piquant aroma that comes from grinding and buffing out metal. It’s sharp and burnt and well…INDUSTRIAL. It basically smells like accomplishment. I’m thankful for this heritage. It has cultivated in me a respect for those who earn a living by old-fashioned labor.

I guess I always took it for granted that my Dad was a welder…for all I knew as that 6 or 7-year-old, he had been born with a welding helmet and striker in hand. Obviously, that wasn’t the case. So how did he get his start in welding?

But first, a little bit of back story to how it all began…

My dad, Gary, was born in a small, picturesque Montana city – the capital, in fact. And when I say “city”, remember, we are talking about the wild, rural west of America. In 1960, Helena was at about 20,000 people. Today it’s up around 31,000. That is a bonafide city to us way out here in the wilderness. Billings, MT at 104,000 population actually fits the bill of “city” better, but we won’t quibble over little details like that.

Gary and his brothers were raised primarily by their dad and step-mom. Their dad had worked at the local Post Office for many years. He taught them to work hard and they were always doing small side jobs to earn money, such as mowing, painting, digging basements, delivering newspapers, selling cards, seeds and shoveling snow.

Gary about 1 year before this story took place

One day at the ripe old age of 14, Gary decided to run away to Deer Lodge, where his mom lived. In retrospect, he admits that he was so impulsive back then & didn’t think things through completely. It was late in October, but it was a nice day out. He had a little bit of money from some of those side jobs mentioned before, his trusty bike and sheer willpower.

Here’s the tale in his own words:

“On Sunday, October 31st, 1971 I took my bicycle over the continental divide. Not McDonald pass, because that would have been too easy. There was another pass near McDonald called Mullan Pass or Mullan Trail. I turned north off the highway at Fort Harrison and went all the way up to the Lincoln Highway and headed Northwest. I rode several miles before someone in a truck picked me up and took me part way up the pass before his truck couldn’t go any farther due to the heavy snows already in the mountains. I jumped out, grabbed my bicycle and started up the steep road until I reached a place where the road started to level off. After riding some miles, I came to a railroad crossing and a junction in the road. I went right when I should have gone left.

By this time, it was starting to get dark, the wind had picked up and it started to snow. It was cold and at 14 I was beginning to wonder if I should have waited until the weather was more favorable (summertime). I went about 5 miles down the wrong road and came to a camper that had a light on. I knocked on the door and the two guys inside invited me in out of the wind and snow. They were just packing up to go home, so one of them made me a cheese sandwich (best sandwich I ever had, by the way) and they offered to take me as far as White’s Place. They couldn’t believe anyone would be up there in the snow on a bicycle. As we drove back up to the junction, they were noticing my tire tracks in the snow and told me where I should have turned. We continued on down the pass until we got to White’s Place outside of Elliston, MT. They dropped me off and I went inside to see if they had a phone I could use.

Between Helena and Elliston lies the Continental Divide

There was a woman behind the bar waiting on a few patrons. She looked me over as I walked in and asked what I wanted because she could get in trouble if the authorities caught me in her bar. I asked to use the phone to call my brother for a ride. She said it was in the back hallway near the restrooms, so I walked back there and looked all over, but saw no phone. I went back to the bar and the lady asked if I made a call. I told her I couldn’t find the phone to make a call with – maybe it was well camouflaged? She had her hands on her hips and looked at me like I was 12 and said “The box on the wall!”. Okay…

So, I headed back to the hallway and I found the box on the wall…I had never used a box like this before. It had a crank on my left and an ear piece on a cord and a small horn shaped thing to talk into. I had used rotary dial phones most of my growing up, so I was looking for the dial or buttons or anything else and there was nothing like that. I picked up the ear piece and there was no dial tone.

So back to the bar I went, and she asked me again if I made the call. I said “How do you use the phone?” and this time she looked at me like I was 8. She held one hand out like she was cranking an imaginary box phone and said “Two longs and short”. I went back to the box, picked up the ear piece and turned the crank briskly two longs and a short. Wonder of wonders, I got the Helena switchboard operator! She connected me to my mother’s house in Deer Lodge. My brother Dan picked up the phone and I asked him to come and get me. After the call, I went back to the front of the bar and the woman behind the bar asked again if I made the call. When I said yes, she asked me how much it was. Clueless, I asked “How much what was?”. She said I had to pay for the call and I said I didn’t know how much it was.

With her hands on her hips, she looked at me like I was 6 and said “Call the operator back and ask her how much that last call was!”

This is the point in the story that I tell everyone that I got to use an antique box phone twice in my life. Anyway, it cost $1.15 since it was long distance, just in case you were wondering. She made me wait at a table by the front door, away from the bar so no one would think I was just having a beer after a long hard day of work (I am still 14 at this point).

About half and hour went by and there was a knock on the bar’s front door, then another knock. I looked at the woman behind the counter and with her hands on her hips (it was becoming a habit by now) she looked at me like I was 4 and said “Answer the door.” I had been under the impression that this was a public establishment where anyone could walk through the front door without knocking first. None the less, I got up and answered the door and lo and behold, there were 6 or 7 kids there dressed up in costumes shouting “Trick or Treat!”. I was fresh out of candy, so I looked at the woman behind the bar again and 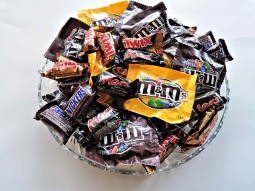 (happily without her hands on her hips this time) she was dumping bags of candy into a bowl and slid it over the bar counter in my direction and asked me to pass it out, which I did.

It took my brother about 2 hours to come and pick me up, but in that time frame, I answered many knocks on the front door and dutifully handed out candy to trick or treaters.

I spent about two weeks in Deer Lodge, then the sheriff came to my Mom’s house and took me to his office, where my Dad was waiting to take me back home.

But that wasn’t the end of the story…stay tuned for Part 2!

3 thoughts on “Two Longs and a Short: The Beginning, Part 1”

Gary’s Welding Inc. was started in Gillette, Wyoming in 1989. Since then, we have provided quality service all over Wyoming and nearby states, including South Dakota, Montana, Colorado & Nevada.